I’ll start with a confession.  When I saw that January 27th was National Cake Day I knew immediately that would be the week for the BAKE SOMETHING FROM SCRATCH challenge.  It wasn’t until I took the picture of the date in my calendar that I realized it was actually National CHOCOLATE Cake Day.  I’d already purchased the items for a white cake with white frosting but no harm. You can never have too many options for cake.

I started my search again.  Checking out Pinterest, flipping through my own cookbooks, searching books at the library for the perfect chocolate cake recipe.  Since I’m a novice baker I needed a basic cake.  Most of the cookbooks on my shelves are about cooking not baking.  The problem with most books dedicated to cakes is that they really want to WOW you.  That’s not a problem if you are an experienced baker but I wasn’t ready to start with a checkerboard cake or one covered in fondant.  I needed a basic layer cake recipe. I did look at my Mom’s (very) old copy of Better Homes & Garden’s New Cook Book.   Those cakes were basic alright.  Find me cookbook today that has six cake recipes on one page.  I was going to need more than a paragraph to make this happen.

Finally walking across the library I spotted a new cookbook by Ina Garten called Cooking for Jeffrey and on the cover was this beautiful chocolate cake with white frosting.  I’d found my cake.

I received some good advice about baking: make sure your eggs and butter are room temperature, grease and flour your pans, weigh your ingredients.  My ingredients were out and at the (hopefully) correct temperature, pans were greased and floured, and the oven was hot. I was ready. When I work in the kitchen I listen to music or audiobooks or podcasts or pretty much anything but not during the baking of this cake.  I felt like I had to focus so precisely on what I was doing that there was no room in my head for anything else.  It was like when you turn down the radio in your car so you can figure where you are going.  (Admit it, you do it, too.) The whole process took a lot longer than I expected.   The butter took a long time to soften. Weighing the ingredients took longer than just scooping them.  The cakes took longer to bake than they said they would.  The cooling took forever. By the time I was done my back hurt, my dogs had relocated to the kitchen floor, and I understood that bakers start at the crack of dawn so that they aren’t baking until midnight. 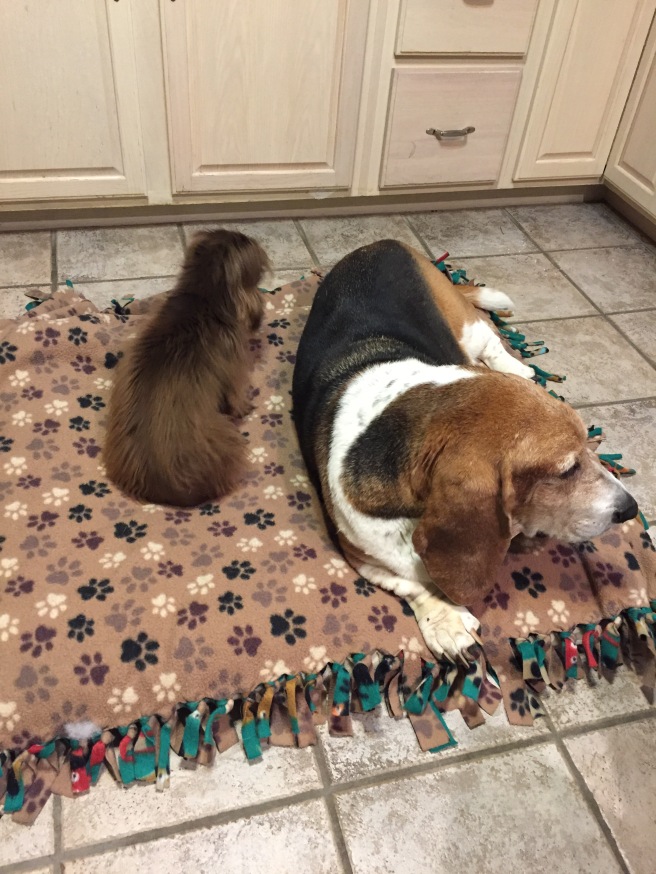 I did not end up using Ina’s frosting recipe.  It requires six sticks of butter!  If you are using your scale you’ll know that’s 1 1/2 lbs.  I’d like to say that it was just on principle that I thought it was too much butter but actually I just didn’t have that much butter left.  Luckily, I was already prepared to attempt a beautiful buttercream frosting.  I didn’t frost the cakes the night I made them.  After a couple of frantic texts to my friend, Terry, about cooling time I let them cool, and wrapped them loosely in plastic wrap so they’d be ready to frost in the morning.

I didn’t get up as early as a professional baker but I did rise before the sun did to get my cakes frosted.  Ina suggested that a revolving cake stand would make the job easier but I don’t have one of those. Luckily, one of the brilliant people on Pinterest suggested that a large-mouth bowl flipped upside down with a plate resting on top works just fine and they were right.

And then it was done.  I didn’t promise you a beautifully decorated cake. Just one that was made from scratch and that would hopefully be edible.  It was edible.  I thought it was a bit on the dry side but overall a baking success.

So, did you bake something from scratch this week?  Did you eat something that someone else made from scratch?  I’ll admit I did enjoy this challenge and I will make another cake from scratch.  In fact, now that I’ve gotten the first-day-on-the-job jitters out of the way I’ll be able to relax and enjoy it a bit more. Lessons learned: 1. the paddle attachment on the stand mixer is the one you need to cream butter not the whisk. 2. cleaning up after making cake is not fun. 3. your value to your co-workers will rise exponentially if you bring them a cake.

Before you go…the cake was devil’s food made with both expresso and sour cream.  It was supposed to be a four-layer cake.  But I know my limitations and when Ina Garten has to use skewers to help her evenly slice her cake layers in half horizontally to get four layers, I’ll just stick to two.  Who am I trying to impress?

3 thoughts on “Let Them Eat Cake!”